The president of the American Lung Association yesterday disseminated negligent medical advice regarding vaping through a tweet that included advice from six physicians. 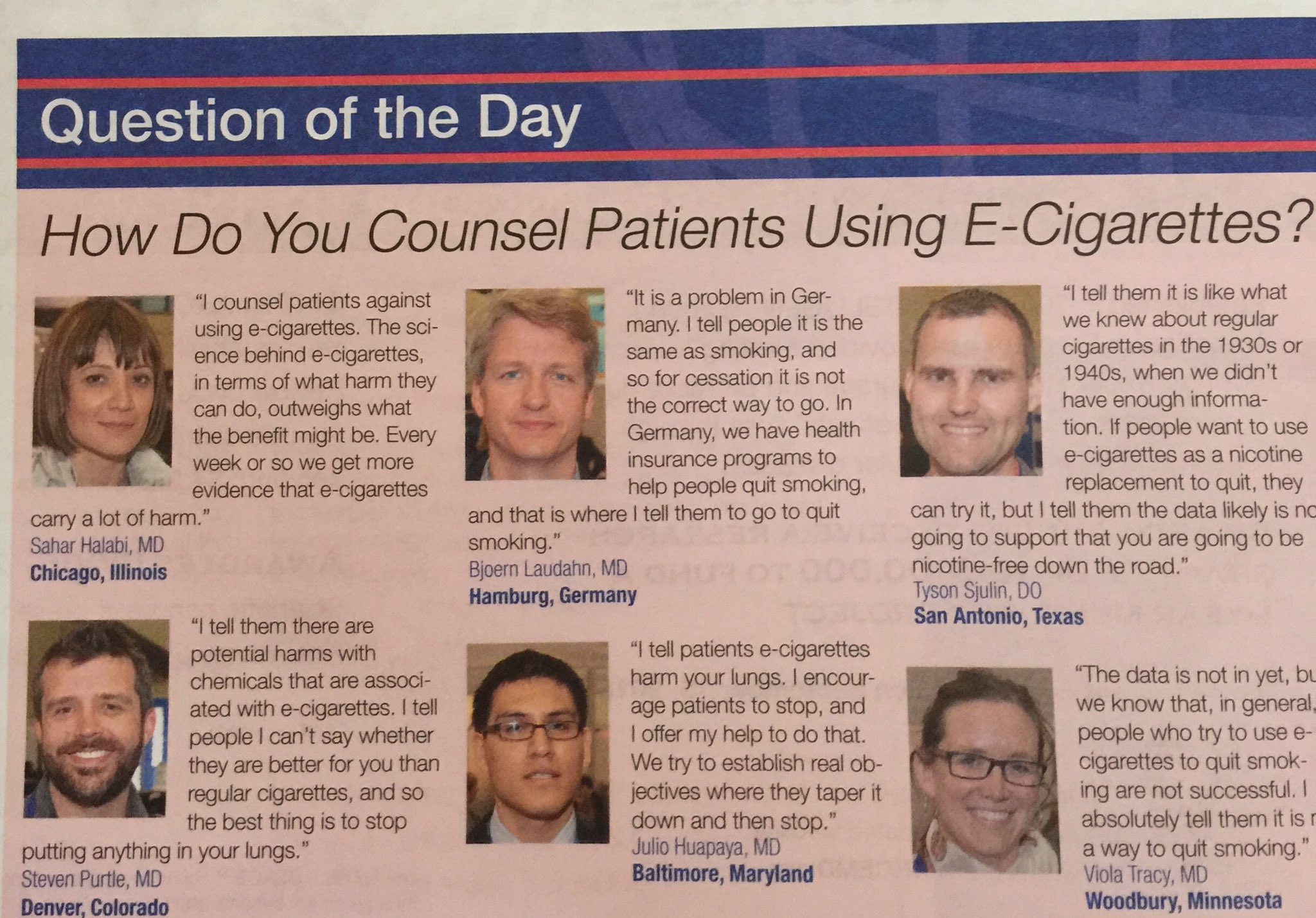 1. Chicago: This advice is negligent because it misrepresents the benefit-risk profile of electronic cigarette use for the individual patient. The physician is telling all smokers that the risks of trying e-cigarettes outweighs the potential benefits. But this is not at all consistent with the science. The science unequivocally demonstrates that there are tremendous medical benefits to patients who are able to quit or cut down substantially using e-cigarettes. And there are essentially no harms because smokers who use e-cigarettes are precisely those who believe they are unable to quit using other methods. This is a complete distortion of the risk-benefit ratio for the individual patient, and it therefore constitutes negligent medical advice.

2. Germany: This advice is negligent because the physician is telling patients that vaping is the same as smoking. This is categorically false. Vaping involves no tobacco whatsoever, and it involves no combustion. E-cigarette aerosol eliminates tens of thousands of the chemicals present in tobacco smoke, including more than 60 known human carcinogens. Switching from smoking to vaping results in dramatic and immediate improvement in respiratory symptoms and lung function. This physician is spreading false information, and it therefore constitutes negligent medical advice.

3. Texas: Like the physician from Germany, this physician is telling patients that e-cigarette health risks are analogous to those for real cigarettes. This is false information, and the medical advice is therefore negligent.

4. Colorado: This physician is telling patients that e-cigarettes are likely no safer than tobacco cigarettes. This is categorically false. Vaping involves no tobacco whatsoever, and it involves no combustion. E-cigarette aerosol eliminates tens of thousands of the chemicals present in tobacco smoke, including more than 60 known human carcinogens. Switching from smoking to vaping results in dramatic and immediate improvement in respiratory symptoms and lung function. This physician is spreading false information, and it therefore constitutes negligent medical advice.

5. Baltimore: This physician is telling patients that vaping harms their lungs. However, there is no clinically meaningful evidence to back this up. While e-cigarette aerosol is a mild respiratory irritant, it has not been shown to affect lung function as measured by spirometry. And it certainly is going to do a lot less harm than continuing to smoke. This stops just short of being negligent medical advice.

It is difficult to understand what the American Lung Association's objective is here. The effect of this communication is certainly going to be to discourage quit attempts among thousands of smokers who might otherwise have been able to achieve smoking cessation using e-cigarettes. And it might also dissuade thousands of ex-smokers from continuing to vape and instead, cause them to return to smoking. Either way, I don't see how this is in any way helping to improve lung health in this country.

It is, however, public health malpractice, which I define as advice which when given to an individual patient would constitute medical malpractice, but which is instead being disseminated to the general public.

For example, if I tell my patient that vaping is just as hazardous as smoking and therefore I advise my patient not to quit using e-cigarettes, I would consider that negligent medical advice because it is false information and it had the effect of causing the patient to assume an increased risk that he otherwise might not have assumed. Thus, disseminating the same information and advice to the general public is an example of public health malpractice, or negligent public health advice.

The difference is not in the harm that is caused by the two; it is simply in that one comes with liability and the other does not.
Posted by Michael Siegel at 8:06 PM

I got my first electronic cigarette kit from Vaporfi, and I recommend getting it from them.