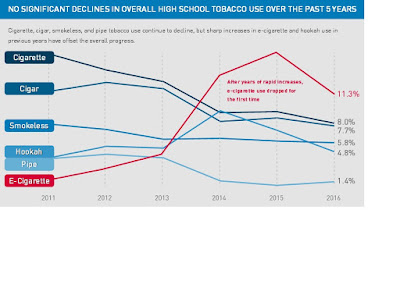 The vast majority of the public perceives vaping as a form of tobacco use so the CDC's numbers are not without foundation.

Vaping does not contain whole leaf tobacco but it does contain nicotine, the main active ingredient in concentrations similar to tobacco. Classifying vaping as a form of tobacco use is not a gross miscalculation as you imply, but a logical conclusion.

Where there is smoke there is fire .
I vape, and there literally is no smoke....public ignorance is not a factor in facts sir

Jerry, what is your point, and just where is the public ignorance. Smoke has nothing to do with if it is considered a tobacco product. If it did then smokeless tobacco (a product that has vanishingly low risk at least as low as vaping, but you won't hear that from Siegel) would not be a tobacco product.

It is the high nicotine content of vaping, comparable to cigarettes, that is the reason it is counted as a tobacco product. That is pretty straight forward reasoning.

Muddled straightforward reasoning without the facts, is what the misinformation is all about :

My point is you are like the people that think they know about ENDS (electronic Nicotine Delivery system )
E juices have several varying degrees of nicotine in different strengths. My wife's last e liquid had ZERO MG of nicotine in it, while i am at 0.3%, down from 1.2% when i first started using them....you digress in strength or stop using the product altogether, or like my wife and so many others, quit altogether .After you get used to vaping, the flavors and there are many of them.... (i still like buttermilk pie myself ) and you just cannot stand the smell of smoke...I am 37 year X smoker thanks to this technology.
There is a company that makes synthetic nicotine also....no tobacco in them at all...and you can extract nicotine from some vegetables also.
Almost identical effect from nicotine and caffeine, but nicotine has grown a bad rap because of the cancer from smoke, and the carcinogens created while setting anything on fire , and inhaling deep into the lungs and blood stream....this is my point Alan.

This is just a few select items that along with lying lobbyist and politico insiders , added to the states additivness to the tobacco tax and MSA agreement

It is irrelevant if e-cigs are a "tobacco product" or not. The key point is that the e-cig is a vastly safer product than the conventional cigarette. The important issue is that increasing vaping prevalence has coincided with decreased prevalence of cigarette smoking among adolescents, something that the CDC chooses to ignore (and thus deceive the public).

Alan it is very intentionally misleading of the FDA to use the same term : tobacco, for two qualitatively very different things: smoking and smokeless.

The problem is not that vaping is considered a tobacco product, but how tobacco is regulated.

Jerry Wayne. If you want to be a freaking NRT then go through the clinical trials and get FDA approval. If you don't want to go that route then vaping is a tobacco product. If case you really want to know, I have been involved with this subject for over 8 years so there is likely little you could tell me I don't already know.

Unfortunately many in the vaping world are sounding eerily like the tobacco control industry the are claiming to be fighting.

The scenario appears to be, yes tobacco is bad bad bad, but we are not tobacco so please please be nice to us. How is that working out?

Working out pretty dam great as a matter of fact.
I have 7 stores and have literally helped tens of thousands of people stop burning tobacco.
The FDA is seeing the light now that there is a new sheriff in town, and new advancements in the medical field and medicines are going to come to fruition sooner than they would have...

Vapor is going to get their shot , and have been granted a reprieve from political adversaries that were trying to put this life saving industry in the ground.

"but we are not tobacco so please please be nice to us " Not to be nice to us, just use some common sense which has sadly the lack therefore has already cost too many lives to count .Tobacco is the devil, and we are far from sainthood, but vapor is many time less harmful than fire .

As for sounding a little like big tobacco, YES, we are fighting fire with fire, and we are kicking major ass in the meantime.
Did you notice how the play on the word FIRE came in there.....its vapors strongest trait.

I am quite sure there is nothing in the world i could tell you that you dont already know....but seeing is believing, and i have been in this fight for 7 years already.

Jerry, you misread the central point. I didn't say vaping advocates where sounding like big tobacco, I said vaping advocates are sounding eerily like the tobacco control industry they claim to be fighting. There is little difference between your statements and what is coming out of TC.

So in your view of the world tobacco is the devil, which is what I would expect to hear from the worst of tobacco control. Instead of quit or die, it appears to be vape or die. It looks like tobacco control 2.0 has reared its ugly head, and it is lead by vaping fanatics.

Lead , follow , or get out of the way....i am fighting fire with fire.

Do not care if people smoke BTW...I see both sides while converting smokers to not.

The best job i never could have imagined.

Seeing this transformation on a daily basis is the advantage and view from my spot.

Were mostly not fanatics, just tired of being lied about, and its coming out of the woodwork now that the lies are true.....God bless sir.

I do get my back up when cornered , and i have been reading your posts for some time now. You seem like a nice person.

I dont know what happened to the good doctor, but this blog hasn't seen a new post for way to long to be called a post any longer.....blowin in the wind....i liked this blog

God speed and thanks for all the information from multiple sources, some whom i admire for their wit, intelligence, and for the opposite of the aforementioned .

I got my first electronic cigarette kit at VaporFi, and I enjoy it a lot.

i Like Your Blog Very Much..I see Daily Your Blog ,is A Very Useful For me.

Huh? Yeah, that was my reaction when I was told you can get paid good money to use Facebook. But I checked it out and I loved what I found.

If you know how to use Facebook then you can generate a serious income doing this, too. Click below to get all the details: