According to an article on the web site of the Des Moines NBC television affiliate (WHO), University of Iowa researchers are claiming that the statewide smoking ban has had a dramatic effect on the incidence of heart disease, heart attacks, and strokes.

According to the article: "The University of Iowa says in the two years Iowa has been smoke free, Iowans reduced their risk of heart disease by staggering numbers. 'Hospital admissions related to heart disease is much less, including stroke after the Smoke Free Air Act,' says Dr. Enrico Martin of the Iowa Heart Center. Admissions have gone down 24%, according to the University of Iowa. In just months, heart attack cases are down 8%. Strokes are down 5%. It's all thanks to the simple action of moving smokers outside."

Before even evaluating the actual data, there are two notes of caution that are important.

First, there does not appear to be any actual study. This appears to be yet another example of "science by press release." This is dangerous because if the conclusions turn out to be invalidated, it is too late to change the news. It is already out there. In fact, this story has been reported widely in the media. There is little opportunity for scrutiny of the study's findings because so far as I can tell, the methods are not publicly available.

Second, there does not appear to be any control group. The statistics being cited are simply declines in cardiovascular disease rates. Since these rates were already declining prior to the smoking ban, these statistics do not actually provide evidence that the smoking ban had any effect on cardiovascular disease rates. In fact, heart attack declines of 8% and stroke declines of 5% since the smoking ban do not appear to be much different from what one would expect in the absence of a smoking ban, given secular trends in these diseases.

Fortunately, we can objectively evaluate the researchers' claims by examining the actual data. Data on cardiovascular disease death rates in Iowa are available from the Iowa Department of Public Health web site.

The statewide smoking ban in Iowa went into effect on July 1, 2008.

Here are the trends in heart attack death rates and stroke death rates in Iowa from 1999 through 2009. The smoking ban implementation is shown in each figure. If the smoking ban had a significant effect on heart attacks or strokes, one would expect to see a substantial decline in these rates during the years 2008 and 2009. 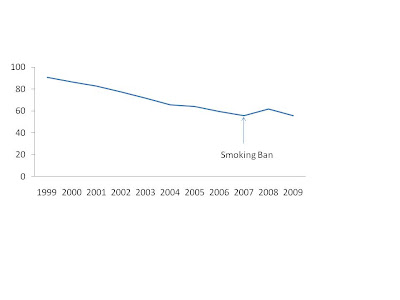 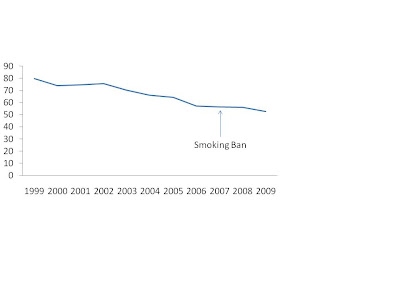 These data demonstrate that the smoking ban clearly had no substantial effect on death rates for either heart attacks or stroke.

Clearly, I am not arguing that the smoking ban has resulted in an increase in the expected number of heart attack and stroke deaths in Iowa. What I am arguing is that the conclusions of these Iowa researchers are invalid, as they are simply not supported by the data. As is the case with most of the smoking ban - heart attack studies, these researchers are engaging in wishful thinking in the absence of rigorous scientific analysis. Once again, it appears that they are using data to try to support a pre-determined conclusion, rather than objectively examining the data.

Will these researchers, and will anti-smoking groups, acknowledge that based on these data for trends in heart attack and stroke deaths in Iowa, the smoking ban has had no effect on either? I doubt it. Because the anti-smoking groups are not interested in the truth. They are interested in disseminating pieces of data that support their pre-determined conclusions.
Posted by Michael Siegel at 8:18 AM