A new report out of the Ohio state Department of Health concludes that the statewide smoking ban implemented in May 2007 caused a significant decline in heart attacks during the period 2007-2009, based on an analysis of hospital discharge data for the diagnosis of myocardial infarction (heart attack).

The study compared hospital discharge data on patients with a primary diagnosis of acute myocardial infarction from before to after the state Smoke-Free Workplace Act went into effect. Data were obtained from all hospitals in Ohio for the years 2005 through 2009. Thus, the rate of change in heart attacks could be estimated for the year before the Act and for the first three years following implementation of the Act.

The report concludes: "The analysis determined a significant change in age‐adjusted rates of AMI discharges within one month after the enactment of the Smoke‐Free Workplace Act."

A press release accompanying the report also boasted that: "The analysis of discharge data from Ohio hospitals ... revealed a sharp decline in heart attack rates immediately following implementation of the law."

The conclusion that the smoking ban led to a significant decline in heart attacks was widely disseminated by the media (example 1; example 2; example 3).

Unfortunately, the actual data presented by the report does not support the conclusion that the smoking ban led to an immediate and significant decline in heart attacks in Ohio.

The annual declines in the age-adjusted hospital discharge rates for acute myocardial infarction across hospitals in Ohio were as follows:

In other words, the rate of decline in heart attack discharges in Ohio was greater prior to the smoking ban than it was in the first three years after the smoking ban.

This clearly does not support the conclusion that the smoking ban resulted in a large and immediate decline in heart attack discharges.

If one looks at the data graphically, one can see that there was little change in the heart attack trend in Ohio after the smoking ban. There was a gradual decline that clearly was present prior to the smoking ban went into effect. The rate of decline decreased slightly during the first two years of the ban and then accelerated slightly during the third year of the ban. 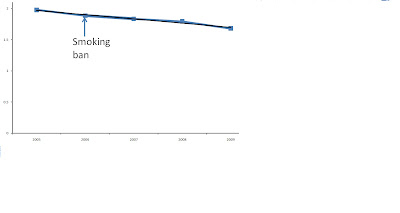 How, then, is the report able to come up with a conclusion that the smoking ban led to an immediate and significant decline in heart attacks?

Had the report simply drawn two lines, one before and one after the intervention, it would have been forced to conclude that there was no significant change in the rate of decline in heart attacks (or if anything, the rate of decline decreased following the smoking ban).

Another way in which the report makes it appear that the effect of the smoking ban is greater than actually observed is by plotting the data on a graph that fails to use 0 as the lower end of the y-axis (again, see Figure 1). This is a classic flaw in graph presentation that can deceive viewers into believing that an effect is present when it is not. Graphs should always have 0 as the lower end of the y-axis in order to avoid this problem.

Darrell Huff discusses this method of distorting data presentation in his classic book "How to Lie With Statistics." (see Chapter 5: The Gee-Whiz Graph)

Because the actual data show no significant increase in the rate of decline in heart attacks in Ohio after implementation of the smoking ban, I won't even get into the most important flaw of the analysis, which is the absence of any comparison or control group. Even if heart attacks did decline in Ohio during the past four years or so, one needs to know whether that is unique or whether heart attacks were also declining elsewhere during the past four years. Without any comparison group, it is impossible to make such a determination.

The rest of the story is that this report has manipulated the analysis in order to try to show an effect that is simply not present in the data. This doesn't do anti-smoking advocates any favors. While I agree with the ultimate conclusion of the health department director - that the smoking ban was a highly appropriate intervention that is having a positive health impact on Ohio residents - a large and immediate decline in heart attacks is not part of the reason. By placing such a large emphasis on the need to demonstrate an immediate decline in heart attacks (when it takes many years for secondhand smoke exposure to cause heart disease), and by distorting the science in order to try to show such effects, anti-smoking advocates are actually weakening, not strengthening the argument for workplace smoking bans.

Posted by Michael Siegel at 6:40 AM