Tobacco Control Science as Shoddy as It Gets: The North Carolina Smoking Ban - Heart Attack Report

Believe it or not, the following data - which show a 21% increase in heart attacks among women during the first year following North Carolina's smoking ban - are the actual data behind the report out of the North Carolina Department of Health and Human Services which concludes that the smoking ban led to a 21% decline in heart attacks in the state. 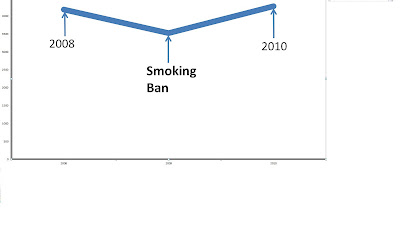 These data are taken directly from the report.

It is simply mind-boggling to me how the report, and anti-smoking groups and advocates which have been disseminating the conclusions of the report, can draw the conclusion that the smoking ban reduced heart attacks by 21% when the actual number of heart attacks among women increased by 21% during the first year after the smoking ban was implemented.

To be clear, I am not suggesting that researchers intentionally omitted the time trend to create this finding. However, I do believe there may have been a subconscious bias toward finding and showing an effect of the smoking ban. We all want to be able to demonstrate the positive results of our enacted policies on the public's health. Here, that bias appears to have clouded the interpretation of otherwise very clear data which fail to show any significant decline in heart attacks attributable to the smoking ban during its first year of implementation.

The rest of the story is that anti-smoking groups have jumped on to a study which concludes that the North Carolina smoking ban decreased heart attacks by 21% in its first year, when in fact heart attacks among women increased by 21% during that year and the rate of decline in heart attacks overall slowed significantly. This is shoddy science and I believe it threatens to undermine the integrity of the tobacco control movement, risking the loss of our ability to effectively advocate for these and other important public health policies.
Posted by Michael Siegel at 4:12 PM