Rhode Island Study Shows No Effect of Smoking Ban on Heart Attacks, But Reports that Ban Caused a 28% Drop

A new study from the Rhode Island Department of Health has concluded that the smoking ban, implemented in Rhode Island in March 2005, resulted in a 28% drop in heart attack admissions in the state (see press release).

The study examined age-adjusted rates of admission for acute myocardial infarction in all Rhode Island hospitals from 2003 to 2009. The report compares the hospitalization rates in 2003 and 2004 (prior to the smoking ban) with those in 2006 through 2009 (the four complete calendar years following the smoking ban).

According to the press release: "The findings reveal a 28.4 percent drop in the rate of acute myocardial infarction (AMI) admissions and a 14.6 percent reduction in total associated cost, representing a potential savings of over six million dollars."

The media are now reporting that Rhode Island's smoking ban led to a huge decline in heart attack admissions.

The rest of the story is that the actual study data show that the heart attack admissions rate in Rhode Island was declining significantly prior to the smoking ban. The analysis fails to take this into account, because rather than examine the significance of the difference between the rate of decline in heart attacks after the ban and the rate of decline prior to the ban, it merely compares the absolute rates of admissions before and after the ban. Thus, it does not control for the baseline, pre-existing trend of a huge secular decline in heart attacks observed in Rhode Island during the years immediately preceding the implementation of the smoking ban.

Here is what you'll find if you examine the actual difference in the observed average annual rate of decline in heart attacks before and after the smoking ban:

In other words, the actual data show a deceleration, or a decrease, in the rate of decline in heart attacks in Rhode Island in the years following the smoking ban.

The figure below plots the actual data. 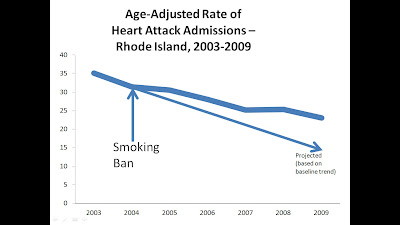 It is clear from the graph that the rate of decline in heart attacks decelerated somewhat after the smoking ban. Had the decline continued following the baseline trend, the expected heart attack rate in 2009 would have been 18.1, instead of the observed rate of 23.1.

One of the major problems with this study is that it does not examine enough pre-smoking ban data to reliably establish the baseline trend in heart attacks. But given the data that is available, one is forced to conclude that there was a deceleration in the rate of decline in heart attacks.

Instead of using the same reasoning it used to attribute changes in heart attacks to the smoking ban, the paper dismisses this "adverse" result and explains it away based on conjecture about changes in the economy: "The severity of the recent economic crisis in Rhode Island likely amplified factors associated with asthma exacerbations, such as poverty and poor housing quality. These factors may have contributed to the increase in hospital admissions for asthma."

Unfortunately, this has the appearance of accepting as a causal relationship any favorable changes following a smoking ban, but rejecting a causal link for any unfavorable changes following the smoking ban. In other words, the research appears to be heavily biased in the direction of interpreting results in order to be able to report favorable findings and not having to report any unfavorable findings.

In order to make any causal attributions at all, one would first have to extend the baseline back at least four to five more years to get an accurate picture of the baseline trends in heart attacks and asthma rates prior to the smoking ban.

While I strongly agree with the paper's recommendation that other states "join the growing list of 35 U.S. states benefiting from smoke-free laws," my support for such policies is not based on the finding that the Rhode Island smoking ban decreased heart attacks by 28%. While we all want to see a positive and immediate effect of these policies on severe morbidity, being scientifically rigorous is still important and it does not help the cause in the long run to draw conclusions that are unsupported by the data. There are enough reasons for policy makers to enact smoking bans. There is no need for us to try to artificially manufacture findings that are unsupported by the data.
Posted by Michael Siegel at 7:40 AM