I have analyzed the data which the Institute of Medicine included and failed to include in its report and today, I reveal that the report failed to consider data from three countries (England, Scotland, and Wales) which seem to clearly show that the smoking bans in these countries had no significant short-term effect on acute coronary events. These data are all national data which include all hospital admissions at all hospitals in these countries. Thus, they represent a better source of data than what was used in some of the published studies (which only included a sample of hospitals). Moreover, they cover large populations, with a sample size greater than that of all other studies combined. Thus, the data from these countries are critically important an carries much weight in the overall analysis.

National data from the National Health Service show that England's smoking ban had no effect on the trend in the number of heart attack admissions during the first nine months that the ban was in effect. 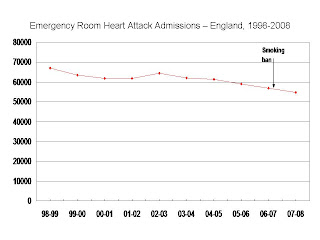 Data from the Scottish national health service, which cover all of Scotland, reveal that while there was a decline in acute coronary event admissions (heart attacks plus angina) in the first year after the smoking ban, the admission rate increased during the second year back to baseline levels. Thus, there does not appear to be any evidence that the smoking ban in Scotland, implemented in April 2006, led to a decrease in coronary event admissions. 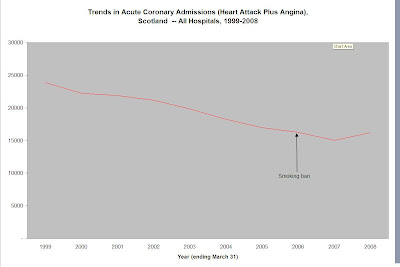 National data from Wales reveal that there was no reduction in hospital admissions for myocardial infarction (heart attacks) during the first 9 months after implementation of the smoking ban throughout Wales. Monthly data on heart attack admissions from all Welsh hospitals for the years 2006 and 2007 were examined. The smoking ban went into effect on April 2, 2007.

The reasons why the report failed to consider these national data are not clear. However, what is clear is that these data were not presented and reviewed in the report.

For this reason, I believe that the conclusions of the report are severely biased. You cannot possibly come to an unbiased conclusion about the effects of smoking bans on heart attacks if you only consider data which support the contention that these bans are having a strong effect. Obviously, if you exclude data which are counter to your conclusion, you are going to bias your analysis.

It appears this is exactly what happened here.

Remember that a meta-analysis or review of data is only as good as its success in reviewing all relevant data that are available. If you only include data that support your position, you are going to end up with a biased conclusion.

By the way, the data for England and Scotland are readily available online and I believe that the committee was made aware of the existence of these data.

The rest of the story is that the report is biased because it fails to include very relevant data from England, Scotland, and Wales which show no evidence that the smoking bans in those countries caused significant short-term reductions in acute coronary event hospital admissions. Because of the size of the populations covered by these data, including them in the overall review would have negated the overall conclusion of the report.