Data I am reporting here for the first time today reveal that there has been no change in the trend of heart disease deaths in Connecticut during the first three years of its comprehensive smoking ban, which covers all workplaces, including restaurants, bars, and bowling alleys.

Connecticut's smoking ban was implemented in two phases. As of October 1, 2003, all workplaces, including restaurants, became smoke-free. Taverns, cafes, and bowling alleys became smoke-free on April 1, 2004. There had been very few smoke-free laws in Connecticut prior to the state law. Thus, in a short window of time in late 2003 and early 2004, Connecticut experienced a drastic change in smoke-free policy, going from virtually no bans on smoking in bars and restaurants to a complete ban in all of these establishments. The only exception was for private clubs which were in existence prior to the ban.

Actually, according to Americans for Nonsmokers' Rights, there were no local smoking bans in effect in Connecticut prior to the statewide smoking ban. This is because Connecticut has a preemption clause in its statute, which prohibits cities and towns from regulating smoking in public places. Previous studies have been criticized because the smoking ban at the statewide level may have replaced numerous local ordinances, and thus the change in smoke exposure was not as drastic as it may have seemed. Connecticut is an ideal place to study the specific effects of a statewide law because there was no pre-existing local protection.

Because heart disease death statistics are available from the state of Connecticut through the year 2006, we now have three full years following the smoking ban in which to observe any changes in heart attack deaths that may have resulted from the ban.

Data available from the Connecticut Department of Public Health for the years 1999 to 2006 were examined to ascertain the annual death rate from ischemic heart disease. This includes deaths from heart attacks and angina.

The data are shown on the graph below, with an arrow indicating the implementation of the comprehensive statewide smoking ban: 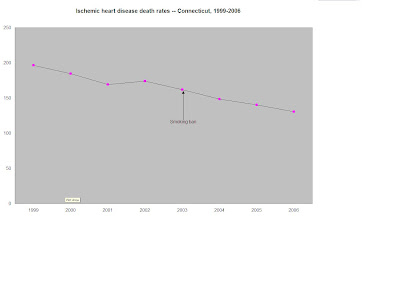 The graph shows that there was no change in the trend in heart disease deaths in Connecticut associated with implementation of a comprehensive smoking ban, at least during its first three years.

In the first three years after the smoking ban (2003-2006), the average annual rate of decline in heart disease deaths in Connecticut was 6.9%.

Thus, there was literally no change in the rate of decline in heart disease deaths during the first three years of the comprehensive statewide smoking ban in Connecticut.

Thus, it is clear from these data that there is no indication of any significant decline in heart disease deaths in Connecticut associated with implementation of the comprehensive smoking ban during its first three years, in a setting in which there were no prior local smoking bans.

These data do not demonstrate that the statewide smoking ban in Connecticut failed to produce significant health improvement. The most immediate effects of smoking bans are a reduction in acute respiratory symptoms and disease, especially symptoms associated with asthma and other respiratory diseases. Over a long-term period, reductions in heart disease and lung cancer will eventually occur.

However, what these data show is that the claims made by numerous anti-smoking groups -- and even by the Institute of Medicine panel that examined this issue -- are not borne out in large populations. These groups have claimed that smoking bans result in immediate and dramatic reductions in heart attacks due to reduction in acute tobacco smoke exposure. They have supported these assertions by opining that even brief exposure to secondhand smoke can cause heart attacks.

Unfortunately, none of the studies which have examined large populations - such as states or countries - have borne out this hypothesis. What appears to be the case is that researchers have selectively chosen a few communities where - either by chance or due to declining trends in heart attacks - a decline in heart attacks was observed in association with a smoking ban. The only studies which have systematically examined the relationship between smoking bans and heart attacks in a number of areas have failed to find a significant effect.

Today's result from Connecticut provides further evidence that, as one would expect based on the underlying science, smoking bans are not going to result in immediate, dramatic declines in heart attacks.

It's unfortunate that the Institute of Medicine committee failed to examine even a fraction of the easily available data from state health departments that could have been used to assess the relationship between smoking bans and changes in heart attacks. My analysis of the data from Connecticut, which took all of about ten minutes, reveals that even in the setting of having no pre-existing local smoking bans, the implementation of a comprehensive smoking ban which included all bars and restaurants failed to result in any significant decline in heart attack death rates within its first three years.

Once again, I ask the question: will anti-smoking groups disseminate these data from Connecticut, or will they continue to cherry-pick the data which supports their position?

And my offer still stands: the first anti-smoking group that previously reported an effect of smoking bans on heart attacks and which now reports these data from Connecticut will receive a $100 prize in the form of a donation to that organization. Of course, I'm not at all worried about losing my money because it's very clear to me that these anti-smoking groups aren't really interested in the truth. They are interested in cherry-picking data which supports their pre-determined conclusions.

While they may feel that in the short-term they are serving the anti-smoking or smoke-free cause, they are deceiving themselves. Relying on shoddy science and biased analysis to promote a supposedly science-based policy is eventually going to backfire, and in a huge way. Once the credibility of a social movement is lost, it is almost impossible to recover. Unless anti-smoking groups want to read about themselves in the papers the way we're now hearing about the shoddy science of some global warming scientists, they need to abandon their biased reporting of the science and begin to separate the science from the agenda.

As I've said before, proving that smoking bans reduce heart attacks within a one to two-year period is not necessary to advocate successfully for these bans. But making claims that are unsupportable will eventually make it difficult to get any smoking bans enacted. Once the credibility of a movement is lost, it is close to irretrievable.
Posted by Michael Siegel at 6:38 AM