Wales Report Claims that Smoking Ban Reduced Heart Attacks But Fails to Present Data, Which Show an Increase in the Expected Number of Heart Attacks

The annual report of the Chief Medical Officer for Wales for 2008 was released yesterday and as anticipated, it concluded that the smoking ban in Wales resulted in a decline in heart attack admissions. The conclusion was widely disseminated.

According to an article published by BBC News, entitled "Heart Attacks Fall After Smoking Ban, Report Says": "The number of people suffering heart attacks has reduced since the smoking ban in Wales began, a report by the chief medical officer has found. ... Dr Jewell's annual report Preventing the Preventable pointed to statistics which showed the number of hospital admissions for heart attacks in 2007/2008 had fallen by 3.7% on the previous year, down from 4,324 to 4,164."

According to another article in the Daily Post, entitled "Smoking Ban Sees Fall in Heart Attacks in Wales," the smoking ban in Wales has resulted in a steep decline in heart attacks. The announcement of this finding was heralded by ASH Wales, which stated: "Bans on smoking in enclosed public places have been demonstrated to effectively reduce heart attack rates so it is not surprising to see Wales following this positive trend."

According to the article: "New figures this week are expected to reveal how the first full year of the public smoking ban in Wales heralded a steep decline in heart attacks. The findings will be contained in the Chief Medical Officer for Wales’ annual report showing hospital admissions have fallen since the ban came into force."

The specific findings highlighted in the article are as follows: "There was a 12.5% fall in the number of patients admitted to hospital with a heart attack between October and December last year, compared to the same period in 2006, before the ban on smoking in enclosed public spaces was introduced in Wales: some NHS trusts have seen the number of heart attacks fall by up to 40% in the same period."

The annual report briefly addressed the issue of the Wales smoking ban's effect on heart attacks, stating as follows:

"Although we are not likely to see the full health benefits of the legislation for some time, for instance an anticipated reduction in lung cancer, there is already some evidence that the ban is having a beneficial effect on health. Hospital admissions for heart attacks were reduced in 2008 and although this decline cannot be wholly attributed to the smoking ban, some studies suggest that at least some of the reduction is due to the legislation."

No other data were presented in the report regarding the relationship between the smoking ban and the trend in heart attacks.

By failing to mention the baseline trend of declining heart attack admissions in Wales, the article (and the public officials and health groups contributing towards this distortion of the science) gives a misleading impression. Rather than causing an acceleration in the pre-existing rate of decline in heart attacks, it appears that the smoking ban was associated with a leveling off of that decline.

Fortunately, thanks to Christopher Snowdon over at Velvet Glove Iron Fist, we know that annual data on emergency room heart attack admissions are available from Health Solutions Wales. These data present the annual number of heart attack admissions for all of Wales, with the year-long periods starting in April of one year and going through March of the following year. This is convenient, since the Wales smoking ban went into effect in April 2007. Thus, any effect of the ban on heart attacks would be expected to show up in the 2007/2008 and 2008/2009 data points.

I created a graph of the trends in emergency room heart attack admissions in Wales from 2003/2004 through 2008/2009. The arrow shows the point at which the smoking ban went into effect. 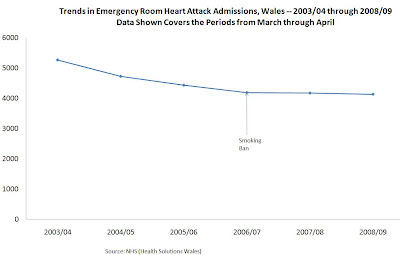 In other words, in the two years since the Wales smoking ban has been in effect, there have been more heart attacks than would have been expected based on the pre-existing trends in heart attacks in the country.

This doesn't mean that the smoking ban increased the number of heart attacks, but it does refute the conclusions of the Institute of Medicine and many anti-smoking groups that smoking bans result in an immediate and dramatic reduction in heart attacks.

Although the Institute of Medicine committee was made aware of the data from Wales, it chose to ignore these data. In essence, the committee cherry-picked the data which supported its conclusion and ignored the data which refuted it. Unfortunately, the data which the committee ignored were the more reliable data, because they were based on large populations. The few studies that drove the committee's findings were conducted in small communities with small numbers of acute coronary events and huge year-to-year variations in heart attacks.

These data from Wales are quite convincing and demonstrate that on a national level, the smoking ban was not associated with any decline in heart attacks. I once again challenge anti-smoking groups to disseminate these findings, and I again offer a $100 prize to any group that previously disseminated the conclusion that smoking bans immediately reduce heart attacks and which now publicizes these findings which refute that conclusion. Of course, I realize that these anti-smoking groups are not interested in the truth; they are only interested in conclusions that are favorable to their position. Thus, I feel confident that I need not worry about losing the hundred bucks.

Christopher Snowdon has conducted a similar analysis to mine and has reached the same conclusion: the Wales smoking ban clearly did not result in any decline in heart attacks. Snowdon's graphs also demonstrate that if anything, the smoking ban resulted in a leveling off of the previous trend of rapidly declining heart attacks in Wales. You can read Christopher Snowdon's comprehensive discussion of the Wales data at these sites: Post 1; Post 2.

The rest of the story is that contrary to the conclusions being disseminated by the media due to misleading data and distorted science by anti-smoking health officials and anti-smoking advocacy groups, the smoking ban in Wales clearly failed to result in a decline in heart attacks during its first two years. While the Chief Medical Officer is absolutely correct that eventually the cardiovascular benefits of the smoking ban will be seen, it is simply too early to expect to see a decline in heart disease due to a reduction in secondhand smoke exposure.

The reliance upon shoddy science regarding the short-term effects of smoking bans on heart attacks has become a rapidly deteriorating aspect of the scientific integrity of the tobacco control movement. Despite repeated pleas and warnings to restore more rigorous scientific standards, which I have been issuing for the past three years, the movement has failed to respond. As a result, data such as that being released today clearly refutes the conclusions that the anti-smoking groups have disseminated.

They jumped the gun, and it turns out that they were wrong. That they were wrong because of a strong bias is regrettable. That they fail to correct themselves in light of clear evidence of the invalidity of their conclusions is worrisome. That they don't appear to even care whether they are distorting the science and misleading the public is inexcusable.
Posted by Michael Siegel at 6:34 AM