New York City: Where You Can Get Cigarettes at Every Corner Store But There's Not an E-Cigarette to Be Found

The New York City Council yesterday passed a law that bans the sale of all e-cigarettes, with the sole exception of tobacco-flavored ones, but allows cigarettes - including menthol-flavored brands - to continue to be sold at any gas station, convenience store, or other retail store in the city.

On the heels of the New York City ban, the governor of Massachusetts today signed a law that bans the sale of all e-cigarettes in the state, with the sole exception of tobacco-flavored ones, but allows cigarettes to continue to be sold at any gas station, convenience store, or other retail store in the state.

There is no public health justification for banning the sale of fake cigarettes but allowing the real ones to remain on the shelves, especially since the fake ones are much safer than the real ones.

Moreover, these policies are going to have a severe, negative impact on the public's health, since they are going to result in many former smokers returning to smoking and many others turning to black market products.

Although these policies strike a severe blow to the protection of the public's health, they are not bad for everyone. They are a tremendous gift to Big Tobacco, especially the cigarette companies which stand to gain financially from the removal of what is currently the greatest threat to cigarette sales.

This gift to Big Tobacco is reflected in the unanimous assessment by tobacco stock analysts: these e-cigarette bans are going to result in a substantial shift from flavored e-liquids to tobacco cigarettes. Because of the removal of competition and the increase in cigarette sales, these analysts are recommending that investors buy tobacco stocks.

You can see how well Altria stock has done since several states implemented or announced emergency bans on e-cigarette sales: 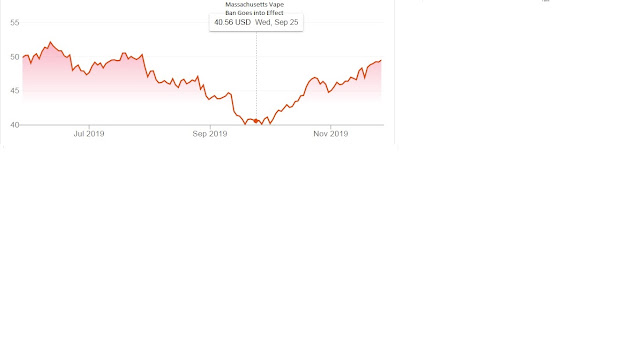